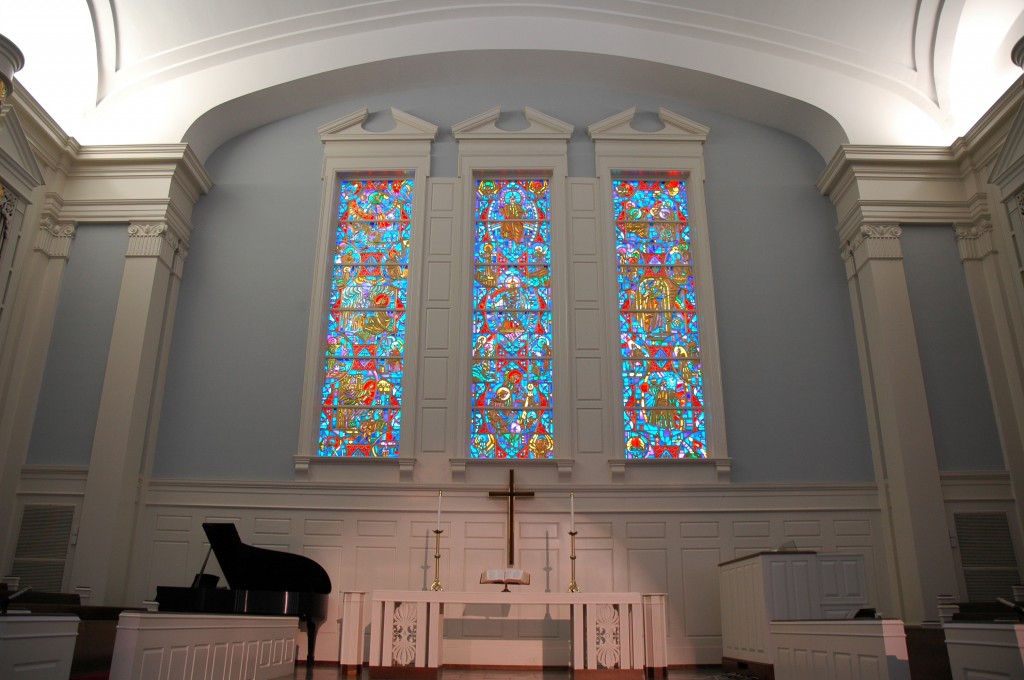 The stained glass windows in the sanctuary, designed by the Stained Glass Studios of  Philadelphia, uses a medium developed by Henry Lee Willet to enhance the beauty of the window in any light without sacrificing the essential character of stained glass. The artist describes the effects in this way:

“The windows present the same pattern with the light behind them or beamed onto them.  But they change color and values with the change of lighting. When the light steams through them they show the jewel-tone rays from the stained glass silhouetting a black pattern becomes a bas relief in gold and outlined by dark gleaming slits where jewel-tones light up when the daylight pours through.

“In the direct light the overlays become the gold and silver bas reliefs and in this light the glass glitters darkly.”

The three panels of the window suggest the Trinity, each of the panels portraying one personification of God: Father, Son, and Holy Spirit.  The first one tells the Old Testament story of God the Creator and Lord of history.  It is designed to be read from the top down. The central portion of the window, to be read from bottom to top, represents the New Testament story of Jesus the Christ, the Incarnate Son of God. Beginning at the top of the third panel, the symbols for the manifestation of God the Holy Spirit, at work in our world are seen.

In the first panel is seen the hand of God, surrounded by a nimbus, reaching out to Adam with a translucent beam which indicated him to be the primary figure of creation.  Eve is there too, just below the creating hand. Also the other wonders of Genesis – sun, stars, planets, the moon, as well as creeping, flying swimming, and walking creatures – are all included.

Other pivotal events of the Old Testament follow as the eye moves downward. Abraham with Isaac, ready to make the enormous sacrifice and the angel staying his hand; Moses receiving the Ten Commandments; the children of Israel crossing the Red Sea; the restoration of the Jews to the Holy Land after their captivity in Babylon. This event is portrayed by Nehemiah rebuilding the walls of Jerusalem, Ezra, preparing to teach the Law, and King Cyrus restoring the sacred vessels to the priests of the Temple.

The four corners of the first panel contain the symbols of prophecies. Amos is shown as a shepherd. Tongs holding a flaming coal from the altar show the seraphim’s sealing of Isaiah’s lips. The martyrdom of Jeremiah is symbolized by a stone and a rod; and a winepress containing a chi rho, the first two letters of Christ’s name, refers to a prophecy made by Isaiah.

The center panel begins at the bottom with the Holy Family, Jesus, Mary and Joseph, and the traditional animals. The star shines as always over the beloved figure. The low position of the manager scene suggest the humble birth of our Lord.

Above and to the left is Jesus being baptized by John the Baptizer in the River Jordan and the descent of the Holy Spirit in the form of a dove. To the right is a representation of Jesus healing a blind man, showing forth the healing ministry of our Lord.

In the center is the figure of Christ coming forth from the tomb and conveying the Christian hope of resurrection from the dead.

Next, above, Jesus is seen teaching in the synagogue and from a boat at the shore of a lake.

In the uppermost position and dominating the entire window is the magnificent figure of Christus Rex, exalted. This figure of the triumphant Christ is seated upon a rainbow, symbol of celestial enthronement. He holds an orb, representing the work with a cross upon it to signify the hope that one day the whole earth will become the kingdom or our Lord Jesus Christ.

The four winged creatures in the small squares of the corners of the panel are symbols of the Four Evangelists. The book held by each winged creature is a gospel. At the lower left, the man with wings is Matthew. At the lower right, the winged lion is Mark. The winged ox represents Luke and winged eagle is John.

The last panel is intended to show the work of the Holy Spirit in the Church from Pentecost to the present day. Beginning at the top with the dove descending upon the disciples, the Holy Spirit is represented empowering them to go forth and teach the Gospel.

The central figure is of Martin Luther committing the act which started the Protestant Reformation by nailing his Ninety-five Theses to the church door in Wittenberg in 1517.

Next is Charles Wesley writing hymns which have been sung in almost every Protestant church. At the right Francis Asbury, the first circuit rider, represents the manner in which Methodism was spread in the late eighteenth and nineteenth centuries.

In the lower center is the figure of John Wesley, looming large to signify the position he holds in the history of Methodism. He is here testifying to his strangely warmed heart and with the symbol of the Holy Spirit directing rays toward the heart of the man at Aldersgate.

In the quarter-circles are seen symbols again: wallet, staff, and escallop representing the sending out of the twelve, the Seventy, and all Christians into the world. Opposite is the helping hand of the Christian reaching down under the Chi Rho toward the up stretched hands of the needy.  The ship with the Cross upon its sail is the modern Church in the storm-tossed world.  In the lower right the space ship amidst the planets represents the space age into which we have already entered.

(Headings were added by editor for readability.)